"It does not pay to say too much when you are mad enough to choke.
"For the word that stings the deepest is the word that is never spoke.
"Let the other fellow wrangle till the storm has blown away.
"Then he'll do a heap of thinking about the things you didn't say."

Insights in the foundational principles of morality and you

Philosophers interested in theories of knowledge have another option for justifying beliefs – coherentism. To picture this theory at work, think of a web. A belief sits at each node in the web, and is connected to other beliefs through strands of logic. Each belief is justified by its relationship to other beliefs, themselves justified in terms of connection to other beliefs, which (eventually) which are all tied together. There are no foundational beliefs – no self-justified propositions that serve as a "foundation" for all others. Everything is justified by the quality of its connections to everything else. Some beliefs are very well connected. Others are connected only by thin threads.

The main aim of moral philosophy is to find the foundational principle of metaphysics of morals uses this idea in the first two chapters of his Groundwork. He wanted to develop a certain principle or principles used to make the ordinary moral judgments, which would be accepted by any normal, sane adult person doesn't address the moral skeptics, who need a reason to act morally, he has another aim – to establish some moral principle and show that this principle is rational. His idea is that "creatures with rational wills" have autonomy.

But there are other aims of moral philosophy according to Kant. One of the questions of moral philosophy is – What ought I to do?  the answer to this question needs to be something more that just informing the fundamental principle of morality. Kant offers a categorization of people's basic ethical obligations to themselves and others. Kant states also that there should be something said about absolute end of human's behavior, like the Highest God and the relation of it to moral life.

Kant often discusses the question of the method of moral philosophy to reach its aims. According to him the fundamental philosophical matters are to be addressed a priori, this means without using the observations of human beings and their behavior. As soon as the fundamental principles of morality are established a priori, the certain conclusions as for the further behavior of a person can be drawn with the help of the fact from his experience. But Kant himself doesn't always use only a priori method, as he talks for example about empirical facts, about practical principles, which determine people's wills.

These ten principles can serve as the analytical base for any social problem. For example, if anyone wonders why catholic church documents focus so frequently on war, peace, nuclear weapons, the economy, abortion, euthanasia, health care, education, and a wide range of other topics that have a clear social and moral dimension, these principles provide the necessary framework for understanding that teaching.

This Highest God to "Kant is complete moral virtue together with complete happiness, where the first one is the basis for gaining the second". Really few of people deserve the happiness. Kant called immorality (unlimited time for people to perfect themselves) and well being (given by Divine Providence) the "postulates", necessary for reason if to talk about moral matters.

Principles are important. Once internalized, they lead to something. They direct our choices. They prompt us to act. A principled person has a place to stand. He knows where he is coming from and where he wants to go. Principles give us purpose. Those of us who are teachers yearn, deep in our hearts, to help form principled persons who are ready and willing to act responsibly.

The newest member of the family 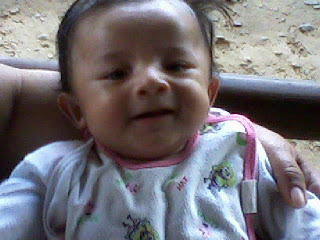 This is Alexandrea, my first niece. Born last October 09, 2012 in the city of Ilagan, Isabela. At four months old, she can now responds to some of our gestures, she yells during her playtime. Currently, she is currently recognizing the Sponge bob's toy. Love it.